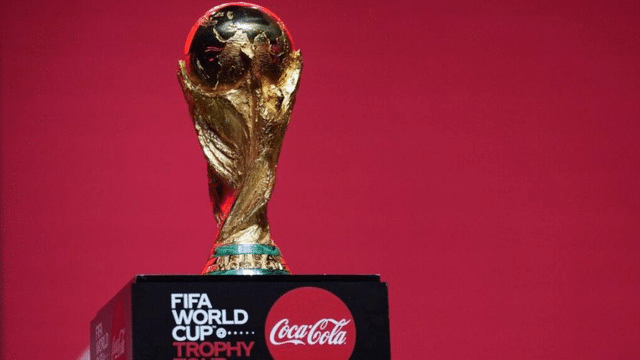 As people around the globe prepare for the 2022 FIFA World Cup, scheduled to begin on Nov. 20 in Qatar, Coca-Cola has kicked off its marketing campaign focused on the sporting event.

Building on its “Real Magic” global platform, which debuted last year, a new 60-second spot points to what’s possible as a crowd of jubilant fans seems to appear out of nowhere. Or do they?

“As a fan, we have to always believe anything is possible,” Brad Ross, vp of global sports and entertainment marketing at the Coca-Cola Company, said in a statement about cheering for your favorite team despite the odds. “That’s where the magical dichotomy of Coca-Cola—one of the world’s oldest and most storied brands, but one that’s equally young at heart—comes to life.”

Coca-Cola’s World Cup marketing push will also involve influencers, commercials featuring devoted fans, a digital hub where consumers can predict winners and, for the first time, a trophy tour to all 32 qualifying FIFA World Cup nations in the three months leading up to the tournament.

“Coca-Cola has partnered with FIFA since 1974, so our credibility in the football world—and our longstanding support of the game’s growth-is unmatched,” Ross said in a statement.

The 2022 FIFA World Cup, however, isn’t without controversy, as thousands of migrant workers have died or been injured constructing facilities necessary for Qatar to host the event.

In May, the Coca-Cola Company released a statement noting it is working with FIFA to address concerns about worker safety.

Football fans in the United Arab Emirates (UAE) will get a once-in-a-lifetime opportunity to watch some of the sport’s best stars this winter, thanks to Coca-Cola Middle East.

Despite the fact that tens of millions of tickets were requested, more than 1.8 million were sold. Even if all tickets are sold out, sports enthusiasts from all around the world may still attend the year’s most anticipated athletic event.

Since 1978, Coca-Cola Middle East has been an official sponsor of the tournament. They are advertising unique Coca-Cola, Fanta, and Sprite bottles for the 2022 FIFA® World Cup.

Fans who purchase these special edition packs will be eligible to win a trip to Qatar for two, which includes airfare, hotel, and tickets to a group stage match.

Each Coca-Cola®, Fanta®, and Sprite® special edition has its unique discount code. Fans may learn if they have won by providing the code to a certain WhatsApp number.

Coca-Cola Middle East has partnered with McDonald’s and Careem to provide discounts on meals and transportation.

From August 20 to October 15, Coca-Cola® will promote the FIFA World Cup 2022 in the United Arab Emirates.

This marketing effort preceded the Coca-Cola World Cup Trophy Tour, which took place from May through June. The most renowned trophy in sports was on display for spectators to witness as it toured across the Middle East and North Africa from the United Arab Emirates to Oman, Kuwait, Bahrain, and Lebanon.